I am tremendously honored, humbled, and excited to have been awarded a Fulbright Senior Research Fellowship to the Cajal Institute in Spain. I am looking forward to continuing my project and conducting research on Santiago Ramón y Cajal in Madrid! Many thanks to "all" who have encouraged my efforts (especially at the Cajal Institute!) and those who wrote letters of support:  Juan De Carlos, Fernando De Castro, Peter Chametzky, Jeff Diamond, Jill Downen, and Laura Kissel.

On September 30, 2016, I posted on this blog my "Cajal Inventory" drawings, installed as one work comprised of forty five drawings.  Those drawings have been used as the basis for a group of paintings, also identified as "Cajal Inventory."  Completed works from the "Cajal Inventory" paintings can be found in this post.  The works have been identified as "inventories" because within them I have compiled and fused imagery and narratives from his personal life, creative works, and scientific drawings.  They are also identified as "inventories" as they represent my interpretation and impressions of the content of Ramón y Cajal's life and research.  Images and ideas are layered in a surreal context which displaces linear time in favor of immersing one in the imagination inspired and conjured by Ramón y Cajal. 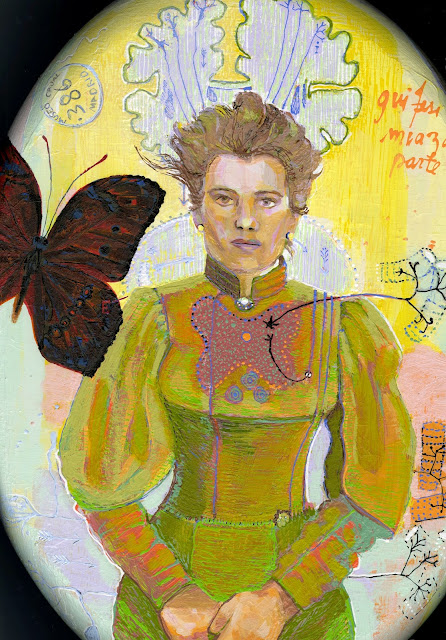 The University of South Carolina has one of the most beautiful campuses in the United States, so each spring and fall I have my students paint and draw on the Gibbes Green.  Last spring while my students were working, I found on the campus trail some of the most exquisitely beautiful feathers in the light dark complementary contrast of yellow and purple - a pure color of yellow and a shade of purple.  I am not sure what exactly happened to the poor bird, but judging from the condition of a couple of the feathers, it would seem as though the fowl had met a woeful, violent end facilitated by a predator.  The feathers were too beautiful to leave, so I collected them and replicated Mother Nature's remarkable craft of complementary contrast for the base color of my "Cajal Inventory" paintings. 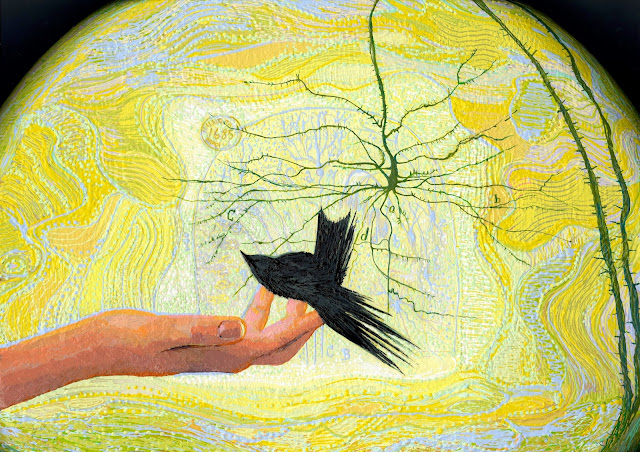 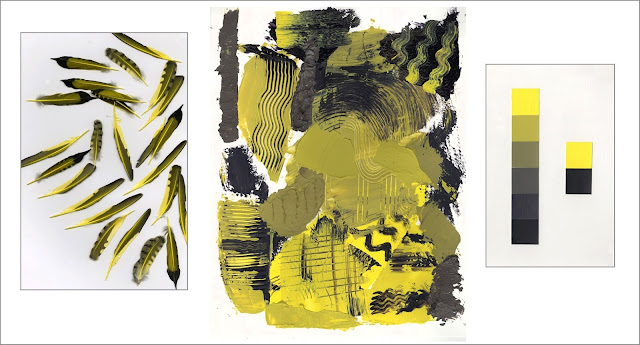 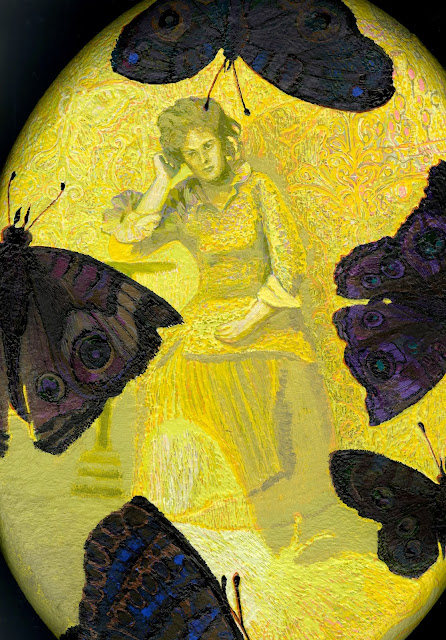 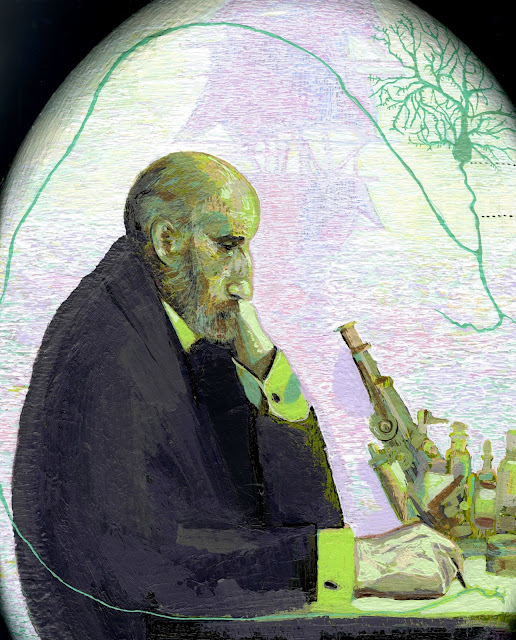 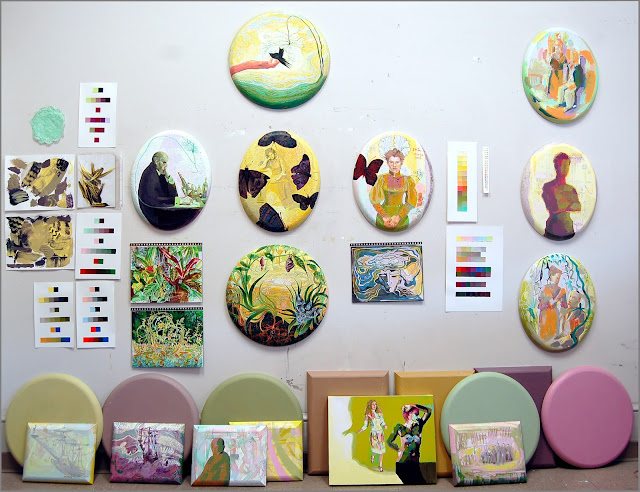 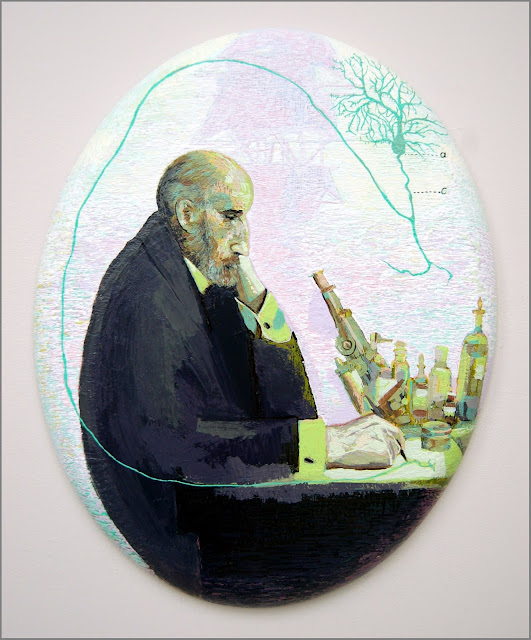 Portrait of Cajal:  Conquest in Solitude, acrylic on oval canvas, 2017 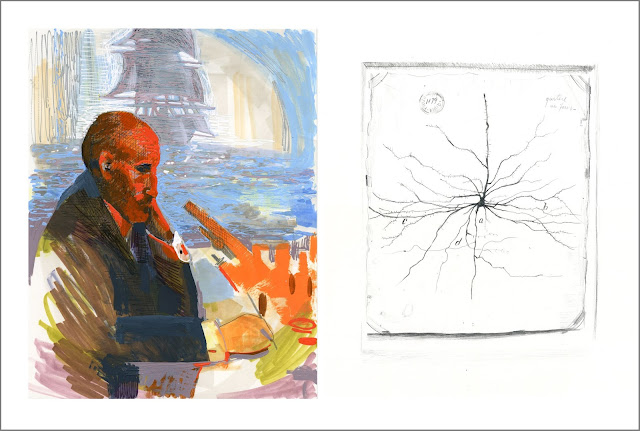 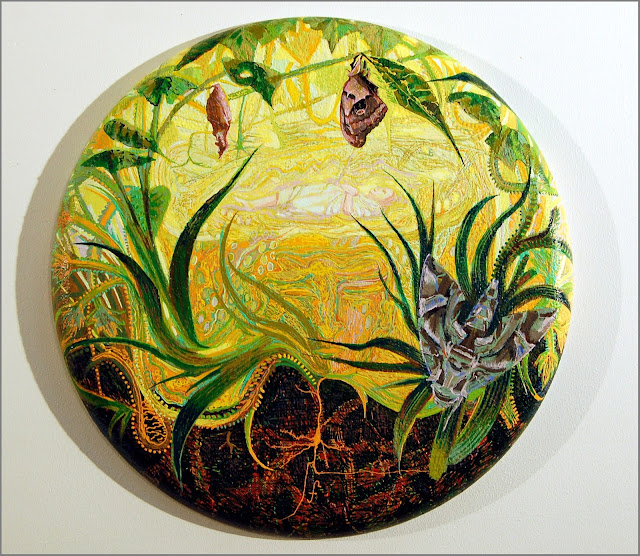 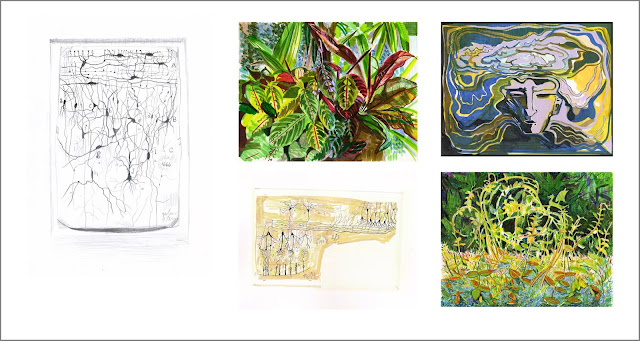 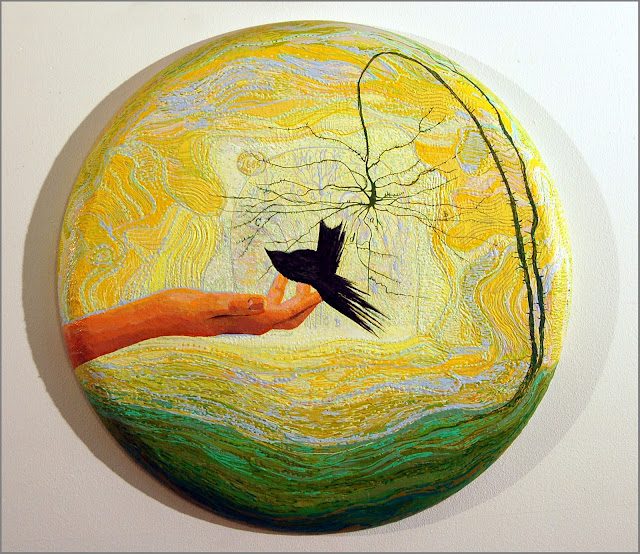 Wren and Cerebellum, acrylic on canvas, 2017

Wren and Cerebellum:  The wren is an active bird:  vibrant, alert, and efficient.  A natural choice of image to juxtapose with the cerebellum, the little brain that, too, is vibrant, alert and efficient.  Cajal's untangling and rendering of the human cerebellum was one of his finest and most important achievements as a histologist.  I have discarded the contemporary medical reference of the latex surgical glove found on the hand in the preliminary drawing in favor of the natural hand in the painting.  The physicality of the painting inspired a reference of "actual" touch. 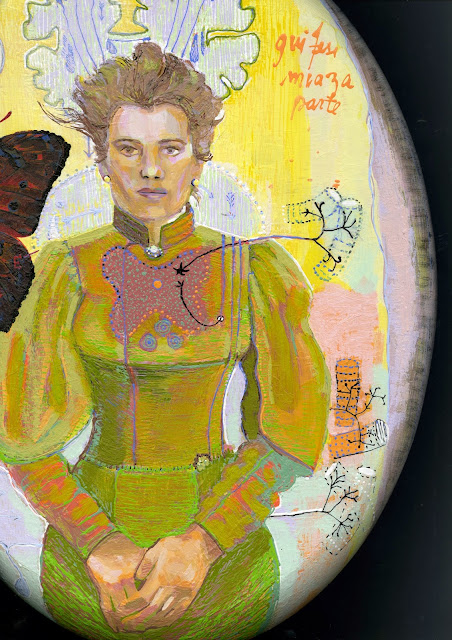 Head, Heart and Spine:  Cajal took many, many photos of his wife Silveria, however, he would lament in his writings that he was never able to truly capture her beauty.  In this work I am trying to highlight her natural beauty and to present her, too, as an idea juxtaposed in his imagination with the histology imagery of his work. 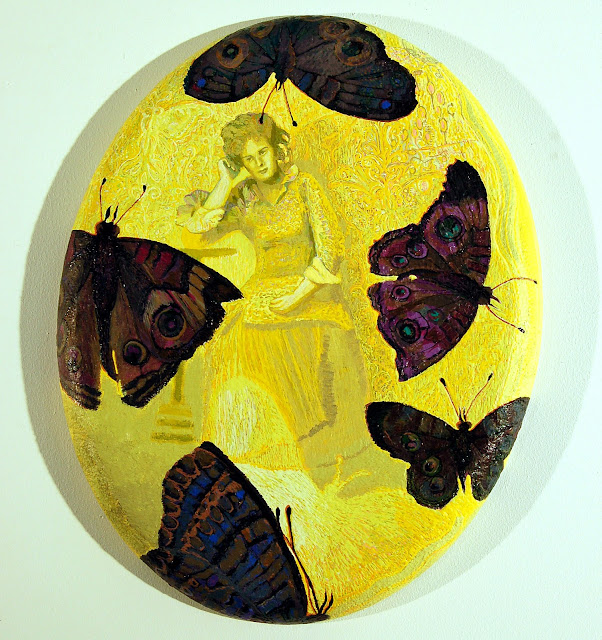 Silveria in Sanguine:  Silvera is the hopeful and uplifting yellow -- sanguine, to the intense depths of Santiago's introspection that held company with his "butterflies."  Ramón y Cajal’s marriage to Silveria Fañanás García is an example of a highly functional complementary pairing.  Ramón y Cajal in choosing a mate selected a woman whose character attributes were what he perceived to be a “perfect” complement to his. In doing so, he believed that their union would be a great accomplishment or matrimonial disaster.  He said publicly many times that he would not be Ramón y Cajal if it were not for his wife and he credits her greatly with making his work and the depth of his research possible.  She incited his maximum vividness.

"Like the enotmologist in search of colorful butterflies, my attention has chased in the gardens of the grey matter cells with delicate and elegant shapes, the mysterious butterflies of the soul, whose beating of wings may one day reveal to us the secrets of the mind."
- Recollections of My Life, Santiago Ramón y Cajal

All of the "Cajal Inventory" preliminary studies have been created through a combination of researching Ramón y Cajal's biographies, photographs and observational drawing.  The drawings that reference his scientific drawings have been created through a direct observation of his actual scientific drawings on display at the National Institute of Health, Bethesda, MD and the Berkeley Art Museum, Berkeley, CA. 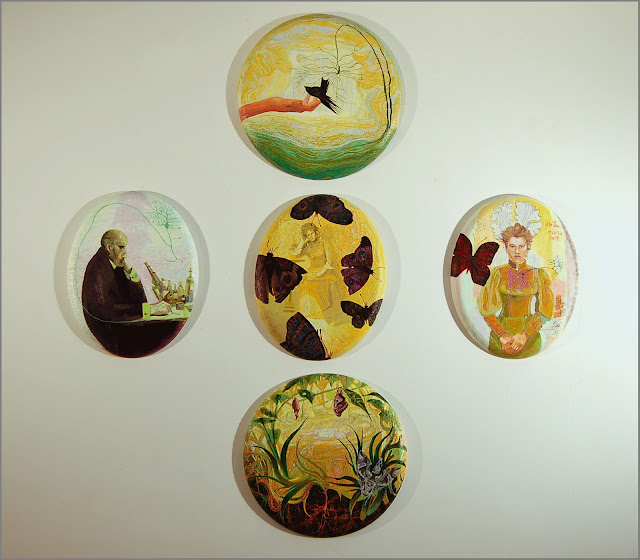